I’ve been a fan of music discovery services such as Spotify and Pandora for years. When news hit that Twitter was starting its own music service I was skeptical. Twitter bought We Are Hunted a year ago with plans to use its technology to tag tracks directly into tweets. Further rumors pointed to integration with established services such as iTunes, Rdio, Spotify, Vevo, Soundcloud, and YouTube (the last three are not yet available). This sounded ambitious, but also very cluttered and invasive.

What drew me to Pandora was anonymity: I could find music on my own without pestering friends or broadcasting to the world. Spotify defaults to socially sharing music, but there are plenty of options for privacy. In contrast, the newly released Twitter #Music requires following many artists and constantly tweeting about music. In the end this will just fill your feed with endless banter. Worse yet, outside of mainstream pop music it’s very difficult to find just what you’re looking for. I wouldn’t use it as either an iOS app or web service.

Upon opening Twitter #Music I was presented with a large panel of thumbnail icons. Each icon displays an artist along with their Twitter handle. Clicking this icon plays a single track from the artist. By default this is a 60 second clip from iTunes, but you can connect a premium Rdio or Spotify account to listen to the whole song. The default category of artists is “Popular”, the top trending musicians that everyone is tweeting about. You can also switch to other selections such as “Emerging” for indie bands mentioned on Twitter, “Suggested” artists based on other artists you follow, and “#NowPlaying” which are tracks tweeted by those you follow. You can also search for artists, but you must follow them before you can listen to their track. 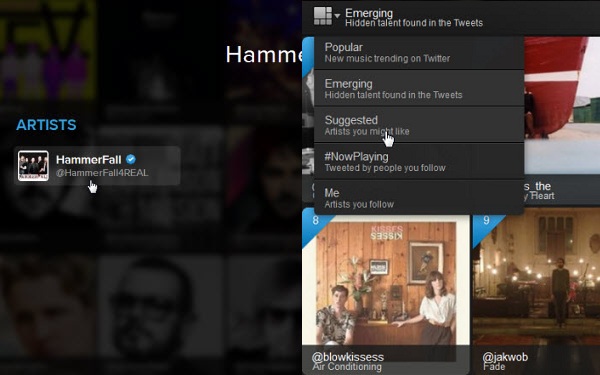 My biggest gripe is that Twitter #Music is geared towards the “Popular” and “Emerging” filters, which might be fine if you only want to listen to what’s mainstream and rising in the indie scene. However, a draw of music services is discovering new and interesting tracks you might not have known about. The “Suggested” filter only provides recommendations based on the artists you already follow. This can mean a near empty list if you don’t follow many musicians. Alternately, you could follow many artists but you’ll now have to read their ranting on your Twitter Feed. The “#NowPlaying” filter is also not very focused. It displays the songs people you follow have tweeted about, which in many cases won’t be your musical taste. 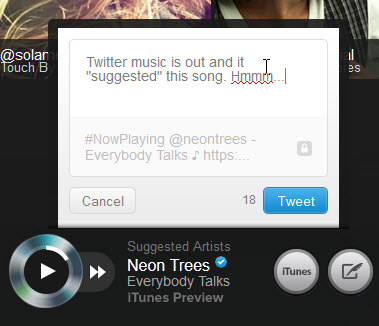 In order to find and send tracks on Twitter #Music I had to follow many bands I never heard of and tweeted from the button on the player interface. This ultimately spammed my Twitter feed and any other apps connected to it (Facebook, Linkedin). This is intrusive and probably resulted in a loss of a few followers. Twitter #Music is still at its root a social media tool with music discovery crudely tacked on. I’d like a little bit of silence and privacy when it comes to streaming music. If I want to find tracks related to artists I like I’ll stick with Pandora, if I want to build my own library of songs I’ll use Spotify. At the moment Twitter #Music has no place in my music collection. 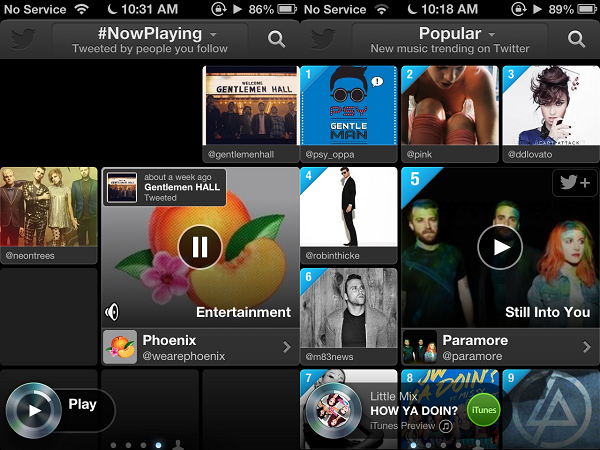 I feel there are improvements that Twitter #Music could add to make its service more compatible with less social users and still remain competitive. These could work on both the web service and iOS version.

At the moment Twitter #Music is bare-bones for actual music discovery. It lacks many features found in other music services such as Pandora, Rdio, and Spotify. These include fundamental basics such as sorting by genre, playlists and increased library of tracks. The most worrying aspect is that it’s still Twitter first and a music provider second. To discover a lot of new music you have to follow many artists and everyone will need to tweet about music. This will just lead to cluttered feeds lacking real information.

Until there are improvements I’ll be sticking to Spotify and Pandora over the brand new Twitter #Music.