Google Reader has already a handy feature to share interesting articles and blog posts in an easy way: the Share link that appears below each item. With this link, as we explained before, Google Reader marks those items as shared and puts them online on an automatically generated web page. However I tend to star items more than to share them – I just find it easier to manage starred articles later on when I want to read or reuse them for any purpose, like Favorites. And the good thing is that starred items can also be shared… even on Twitter! All you need is three user accounts (one for Google Reader, one for Twitter and one for Twitterfeed) and follow these simple steps:

1. The starred items feed is set to Private by default, so first of all you need to go to Settings > Folders and tags and mark it as “Public” from the drop-down menu.

2. Click the View public page link. This will open a website generated by Google Reader with all the items you’ve starred. Right click the Atom feed link and copy the URL.

3. Go to your Twitterfeed account and set up a new feed with the URL you just copied. Tweak settings according to your needs (update frequency, post prefix, number of posts to be published) but try not to take over your follower’s timeline with too many starred items.

4. Twitterfeed will take a while to check your feed and update it for the first time. From that moment on, all the items you star on Google Reader will be automatically published on Twitter. 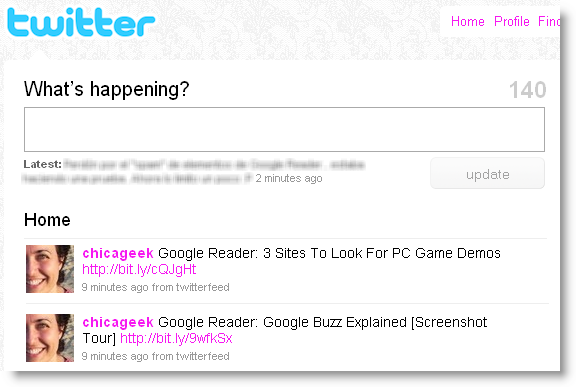