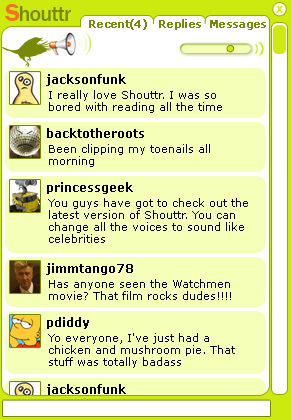 We love checking out Twitter clients. From Firefox add-ons to iPhone apps, Twitter seems to be the web service that is attracting the most creative development. In fact, does anyone tweet from the Twitter homepage anymore?

In this Twitter-frenzied world, it was only a matter of time before things went a bit too far. Shouttr, currently in an alpha-development stage, is a program that lets you post and read tweets others much like any other Twitter client. But it will also read aloud tweets for you as they arrive. You can configure voices yourself, from a selection included with the application (male, female, sexy and so on)

As well as shouting your Twitter feed, Shouttr also has an option to read out “Twitter Everyone”, which results in a cascade of never-ending tweet noise. Imagine you could hear everyone’s babble, all the time, all at once. This is a pretty good simulation – this is how it feels to be totally wired into the chatter node of human consciousness.

Whether or not it’s useful is another matter. The developer points out that by making tweets audible, you no longer need to read them, and therefore it saves you time. That’s as may be, but many people will find this massively distracting.

The iPhone version that’s apparently in the works takes things to another level. It means that soon you won’t be able to walk down the street without hearing a constant stream of consciousness being burped out of the Internet. The promotional video for Shouttr demonstrates just how far Twitter ‘enhancements’ have come. But do we really need this level of advancement of a Web service that’s made a mark because of its simplicity?